Ask the average person if 2015 was a good year for the people of the world, and you will probably get a negative response. And why not  considering  all the natural disasters, terrorism. mass killings, growth of ISIS and civil wars during the past twelve months. Obviously the Prince of Darkness was active in 2015.

But according to Charles Kenny, a senior fellow at the Center for Global Development, “2015 was the best year in history for the average human to be alive.” Really? Here are just a few examples of the facts Kenny offers as evidence:

The mortality rate from famine and undernourishment is down.
Childhood illnesses of all kinds have dropped dramatically.
The number of electoral democracies is at an historic high.
The world is better-educated, better-fed, healthier and freer.
Violent crime in America is down.
Female literacy reached new heights.

Peter Diamandis, named one of "The World’s 50 Greatest Leaders" – by Fortune Magazine in 2014, claims that “90% of the news in the newspaper and on television is negative . . .”

If we only pay attention to the negative reports the media love to stress, and if we are constantly preoccupied by our own personal misfortunes, we will be in a state of depression and despair all the time. 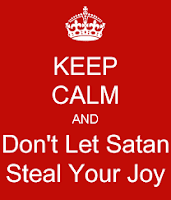 St. Peter said that “Satan walks around like a roaring lion looking for someone to devour and deprive of all joy and pleasure.” St. Paul commanded us to “put on the armor of God” to battle the evil one.


Last month,we heard from friends and loved ones who wished us a Happy New Year. So what will it be for you in 2016?  Will you allow the negative  to determine your mood or will you look for the positive in your own life and throughout the world?
Posted by Bruce and Nancy at 6:24 AM