A New Look for a Christmas Pageant 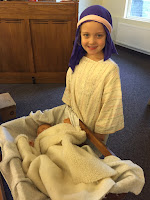 
Some people in the congregation that night thought the Christmas Pageant was spoiled. Others thought Sarah’s new approach to the Christmas Story was perfect. Maybe it was even better than perfect. It was real.