The Global Positioning System, or GPS as we refer to it, is a satellite based navigational system made up of at least 24 satellites that continuously transmit their current time and position. A GPS receiver monitors complicated technical signals from the satellites and solves complex equations to deliver the exact position of the receiver.

The Global Positioning System is a technological miracle and a ubiquitous feature of modern life.

But wait a minute! There is a bug that weighs less than an ounce that has an internal GPS with similar ability, and it doesn’t use satellites. The monarch butterfly migrates from Canada over landscapes it has never seen before to a predetermined destination 3,000 or more miles away in Mexico.

The monarchs fly approximately fifty miles each day, and regardless of where they begin their journey, millions arrive in Mexico between October 31 and November 2.

What is more amazing is that each monarch makes the trip only once leaving the journey back to North America in the spring to four generations of descendants. 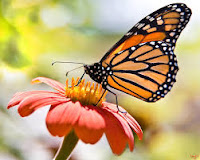 If the GPS is considered a man-made miracle, the monarch’s ability to navigate in unfamiliar territory deserves that designation as well. It’s a miracle!

Prominent American author Betty J. Eadie said this on the subject of miracles:

“Sometimes God will give us a miracle just to remind us that He can.”