Two baby footprints, colored in blue and pressed against white paper to give the appearance of a heart ____ that was Nancy's Mother's Day gift from our five-months-old great-grandson, Oliver.

Oliver's heels point back to his ancestors, branches on his family tree from Russia, Sweden, the Netherlands, Germany, Ireland, Switzerland, England and other nations throughout the world. From those who preceded him, he has inherited DNA which will help fashion his personality.

From his mother, Lindsey, and his father, Alex, and the rest of his living family, he will receive love and support throughout his life. 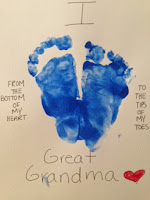 Oliver's tiny toes point forward to what he will become ____ an artist, explorer, engineer, poet, entertainer or a teacher like other family members before him. As a citizen of the United States, he has unlimited potential and opportunity to make of himself whatever he wants to be.

The print of Oliver's feet is shaped like a heart, the purest part of him within which lies the spark of Divine Creation, placed there by a Creator who will love him and walk beside him throughout his life.

"For I know the plans I have for you declares the Lord, plans for good and not for evil, to give you a future and hope."