God and the Sons of Liberty

The recent three-night, six-hour Sons of Liberty series on television received much criticism from knowledgeable scholars because of the numerous inaccuracies leading up to the Declaration of Independence.

No one should have been surprised by the fabrications, because the History Channel made it clear from the start the production was, “a dramatic interpretation of events that sparked the revolution.”

There is an element of Sons of Liberty that makes all the half truths and falsehoods completely irrelevant to everyone but historians and history buffs. In one of the concluding scenes, General Washington reads to his troops from the Declaration of Independence.

“We hold these truths to be self evident, that all men are created equal, that they are endowed by their Creator with certain unalienable Rights, that among these are Life, Liberty and the pursuit of Happiness.” 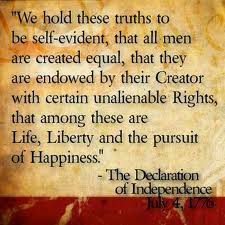 The fifty-six original Patriots signed their names to a document that makes  four references to a Deity: “Nature’s God, a Creator, the Supreme Judge and divine Providence.”

Clearly, it was the Founding Fathers faith in God that gave them the courage to proclaim independence and take on the British Empire and the world’s most powerful military force of that time.

I wonder if those who lead our country today still believe God has blessed this great nation?