After a thirty year career as a college administrator, I was invited to serve local churches as a preaching lay pastor. For the next fourteen years, I shared a meditation with my congregations nearly every week. Those sermons were later posted in a blog titled Contemporary Parables which is still followed by readers all over the world.  More recently, I edited the Parables and taped them for a local radio station as one minute inspirational messages. In 2019, those radio Parables were published in both Kindle and paper back books, and both versions are now available on Amazon.com for $5.95. Contemporary Parables in all formats are intended to be a blessing and a source of strength, courage and inspiration. Let it be so.  Bruce Westerdahl

Contemporary Parables is now available as a Kindle book. If you have the Kindle app, you will be able to access the book. The blog will continue to be available but no new parables will be added in the near future.

Many thanks for your dedication to my blog which was initiated in 2009. It was later available on our local radio station WFLR.  Bruce Westerdahl

In the sixth chapter of Matthew the 28th verse, we read that Jesus said:

"Consider the lilies of the field, how they grow: they neither toil nor spin, yet I tell you, even Solomon in all his glory was not arrayed like one of these. "

I also invite you to consider the dandelion. We call it a weed, and American home-owners spend millions of dollars each year to kill this non-lethal, beautiful and useful plant. Our motive is to have a green flawless field of grass.

Few people know that as a vegetable, the dandelion is rich in  vitamins A, B complex, C, and D, and minerals such as iron, potassium, and zinc.  The root of the dandelion can be used for medicinal purposes or roasted and used as a coffee substitute. The flowers provide pollen for bees, and can also be harvested for wine. 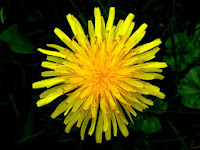 The fact is, we have underestimated this beautiful and useful plant, and there is a lesson about judging people in that incorrect assumption. How often do we misjudge people on the basis of their appearance or actions without really knowing anything about them? To my shame, I made that very error as I was preparing this Parable.  I challenge you not to do the same.
Posted by Bruce and Nancy at 5:20 AM

George and Rosie loved each other deeply, so much so that during the forty years they were married, they did everything together  They were inseparable in every area of life . . . except one. When George drove Rosie to church every Sunday, she went into church, and George sat out in the car and read the Sunday papers.

In time, Rosie died, and for many Sundays after that, church members looked in the parking lot, but George’s car was no longer there.

Several months later, on Easter Sunday morning, George’s car appeared again, and this time, George went into the church. The preacher delivered a stirring message on the resurrection, and then, as was his custom, he invited the members to respond.

At that moment, George stood up, and with deep emotion, announced boldly and loudly, “ROSIE LIVES.”

Then George began to sing, “My wild Irish rose, the sweetest flower that grows . . .”  One person joined in, then another, and finally the entire congregation was joyfully singing what someone described as, “The most beautiful Easter Hymn ever sung in our church.”

So it was with Rosie. So let it be with you.
Posted by Bruce and Nancy at 5:58 PM